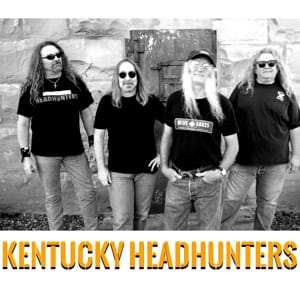 American country rock and Southern rock band Kentucky Headhunters were founded by brothers Richard and Fred Young and Greg Martin in 1986. The band scored 4 consecutive Top 40 hits from their 1989 debut album "Pickin' on Nashville" and released 7 albums and over 20 singles. Their biggest seller "Oh Lonesome Me,"was a Top 10 hit in 1990.

Is your favourite Kentucky Headhunters MIDI Karaoke File or MP3 backing track missing? If you need a new backing track that’s unavailable at the current time, click in the Contact button at the top of the page and request the backing track. If the song is current and in the charts, chances are we may produce it at normal catalogue prices.