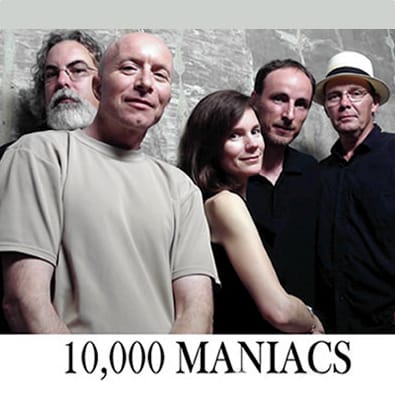 10,000 Maniacs are a band formed Jamestown, New York, United States in 1981. The band members include Rob Buck, Natalie Merchant, Bob "O'Matic" Wachter and Jerry Augustyniak. 10,000 Maniacs breakthrough album "In My Tribe” was released in 1987. The lead single from that album was “What's the Matter Here?”. 10,000 Maniacs has recorded 9 studio, live, compilation albums and released 21 singles. 10,000 Maniacs most popular songs include Because The Night, More Than This, Trouble Me and What's the Matter Here? GENRES: Alternative Rock, College Rock and Acoustic. AMCOS Licensed. © 2016 John Ialuna Biography author for Hit Trax.

Is your favourite 10,000 Maniacs MIDI Karaoke File or MP3 backing track missing? If you need a new backing track that’s unavailable at the current time, click in the Contact button at the top of the page and request the backing track. If the song is current and in the charts, chances are we may produce it at normal catalogue prices.