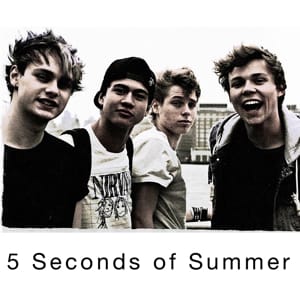 Formed in 2011 in Sydney, Australia, 5 Seconds of Summer gigged at local venues and festivals playing covers and some originals. The band posted video's of their performances on YouTube and have mastered the art of Social Media band promotion. Their efforts caught the attention of Sony ATV Music resulting in their EP 'Unplugged' reaching number 3 on the iTunes chart in Australia. Several releases and hits followed on with the band creating ties and touring with English male vocal group One Direction (2013).

Is your favourite 5 Seconds Of Summer MIDI Karaoke File or MP3 backing track missing? If you need a new backing track that’s unavailable at the current time, click in the Contact button at the top of the page and request the backing track. If the song is current and in the charts, chances are we may produce it at normal catalogue prices.