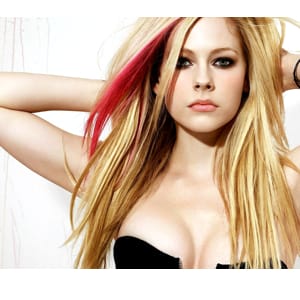 Avril Lavigne has sold over 30 million albums since her 2002 debut album "Let Go". A talented singer, performer, actress and designer of perfumes and clothing. Lavigne reached considerable success in the early 2000's with the #1 single 'Girlfriend', followed up with Sk8ter Boi, I'm with you, My happy ending and Nobody's home.

Is your favourite Avril Lavigne MIDI Karaoke File or MP3 backing track missing? If you need a new backing track that’s unavailable at the current time, click in the Contact button at the top of the page and request the backing track. If the song is current and in the charts, chances are we may produce it at normal catalogue prices.