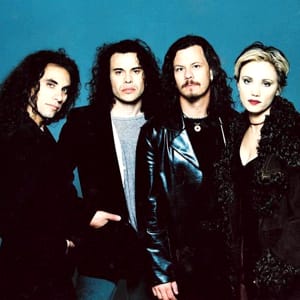 Baby Animals were an Australian band formed in 1989 by Suze DeMarchi, Dave Leslie, Eddie Parise and Frank Celenza. The band's first performances were under the namd 'Woody's Heroes'. They chose the name Baby Animals after watching host John Burgess do an ad on TV's Wheel of Fortune. Baby Anilamls achieved worldwide exposure by touring with Bryan Adams, Van Halen, Extreme and The Black Crowes, picking up numerous awards for their singles and Albums.

Is your favourite Baby Animals MIDI Karaoke File or MP3 backing track missing? If you need a new backing track that’s unavailable at the current time, click in the Contact button at the top of the page and request the backing track. If the song is current and in the charts, chances are we may produce it at normal catalogue prices.