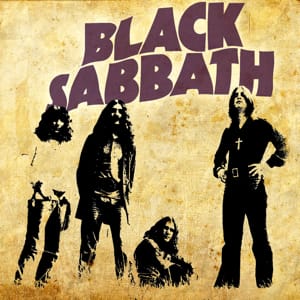 Black Sabbath are a heavy rock band from Birmingham (UK) and formed in 1968. Starting as a blues band, Black Sabbath's music soon developed into occult and horror-inspired lyrics and songs about social, political, war and drug related issues. Guitarist Tony Iommi was among the first of the 70’s inspired guitarists to tune down his instrument creating the Heavy Metal tone copied to this day by his contemporaries. Black Sabbath’s highest selling commercial hit was “Paranoid”, released in 1970. AMCOS Licensed © Bio by John Ialuna for Hit Trax Australia, USA, UK, Canada and Europe.

Is your favourite Black Sabbath MIDI Karaoke File or MP3 backing track missing? If you need a new backing track that’s unavailable at the current time, click in the Contact button at the top of the page and request the backing track. If the song is current and in the charts, chances are we may produce it at normal catalogue prices.