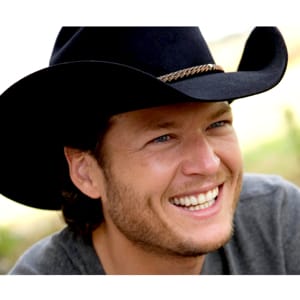 Blake Shelton is an American Country singer-songwriter. Shelton's 2001 debut album held #1 on the USA country charts for 5 weeks. Shelton's 8 studio albums have all become million plus sellers and earned various music awards, including CMT Music Awards, Country Music Association and Grammy's. In 2013, Shelton teamed with NBC and other artists to raise money for victims of the Oklahoma floods. The concert featured a who's who of country artists and raised much needed funds for Oklahoma residents. (Bio by John Ialuna 2013)

Is your favourite Blake Shelton MIDI Karaoke File or MP3 backing track missing? If you need a new backing track that’s unavailable at the current time, click in the Contact button at the top of the page and request the backing track. If the song is current and in the charts, chances are we may produce it at normal catalogue prices.