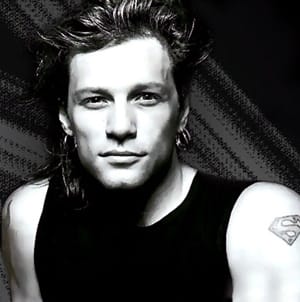 Download Bon Jovi MIDI Files and mp3 Backing Tracks - Jon Bonjovi I a singer, guitarist, songwriter, actor and producer. He and his band which includes guitarist Richie Sambora, gained fame through their Debut album 'Slippery When Wet" Hits include "Livin' on a prayer", "Wanted - dead or alive", :Blaze of glory" and "You Give Love a Bad Name". Bon Jovi appeared in the TV hit series "Ally McBeal"and appeared in several films.(© 2013 John Ialuna Biography author)

Is your favourite Bon Jovi MIDI Karaoke File or MP3 backing track missing? If you need a new backing track that’s unavailable at the current time, click in the Contact button at the top of the page and request the backing track. If the song is current and in the charts, chances are we may produce it at normal catalogue prices.