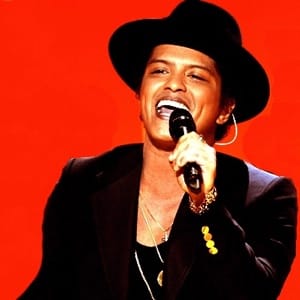 Recording and performing artist Bruno Mars was born Peter Gene Hernandez on October 8 1985 in Honolulu, Hawaii. Bruno Mars is a singer-songwriter, producer and choreographer. Genres include R&B, Funk and Pop. Bruno Mars breakthrough album "Doo-Wops & Hooligans" was released in 2010. The lead single "Just the Way You Are" hit #1 on the charts. As of 2016, Bruno Mars has released 7 albums and achieved 15 Top 10 singles. Popular singles include Locked Out Of Heaven, Just The Way You are, The Lazy Song, Uptown Funk, Grenade and When I Was Your Man. GENRES: Rhythm and Blues, Funk, Pop/Doul. AMCOS Licensed. (© 2016 John Ialuna Biography author for Hit Trax)

Is your favourite Bruno Mars MIDI Karaoke File or MP3 backing track missing? If you need a new backing track that’s unavailable at the current time, click in the Contact button at the top of the page and request the backing track. If the song is current and in the charts, chances are we may produce it at normal catalogue prices.