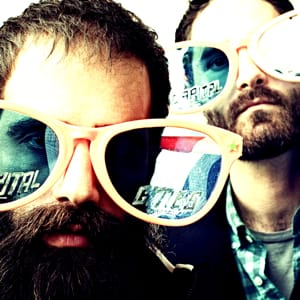 Ryan Merchant and Sebu Simonian. Originally created jingles for ad campaigns including the 2011 Diabetes Hands Foundation's Big Blue Test program. They formed Capital Cities and in 2012, signed to Capital Records and recorded their debut 2013 album, "In a Tidal Wave of Mystery" The Safe and Sound video was nominated for several awards , winning the 2013 MTV Video Music Award for Best Visual Effects. (Bio by John Ialuna 2013)

Is your favourite Capital Cities MIDI Karaoke File or MP3 backing track missing? If you need a new backing track that’s unavailable at the current time, click in the Contact button at the top of the page and request the backing track. If the song is current and in the charts, chances are we may produce it at normal catalogue prices.