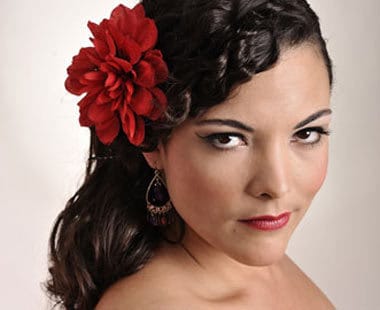 Dutch singer Caroline Esmeralda van der Leeuw is better known by her stage name “Caro Emerald”. Her debut single “Back It Up” (2006) was a local hit. In 2009 she had her first number 1 single “A Night Like This”. Emerald’s first album “Deleted Scenes from the Cutting Room Floor” held the top album position for 30 weeks and become the highest selling album (Netherlands) in 2010. To date, over 3 million copies of her debut album are in the hands of fans. In 2010, was the recipient of the Emerald “Edison Award” for Best Female Artist. Success followed Emerald into the UK with her 2013 release “The Shocking Miss Emerald” which became her first number 1 UK album.

Is your favourite Caro Emerald MIDI Karaoke File or MP3 backing track missing? If you need a new backing track that’s unavailable at the current time, click in the Contact button at the top of the page and request the backing track. If the song is current and in the charts, chances are we may produce it at normal catalogue prices.