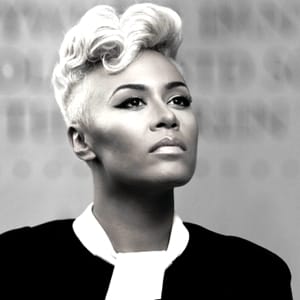 Real name Adele Emeli Sande and born 10th March 1987, Emeli Sande is based in the UK and a popular R&B Soul singer and songwriter. Sande wrote songs for Leona Lewis, Cher Lloyd, Rihanna, Susan Boyle and Alesha Dixon among others. In 2010, Sande released her album "Our Version of Events" which included the international hit "Next To Me". Sande's collaboration with Labrinth produced the gramattically incorrect "Beneath Your Beautiful" which became a million seller in the UK. In 2012, Sande performed at the opening and closing ceremonies of the London Olympics. (© 2013 John Ialuna Biography author)

Is your favourite Emeli Sande MIDI Karaoke File or MP3 backing track missing? If you need a new backing track that’s unavailable at the current time, click in the Contact button at the top of the page and request the backing track. If the song is current and in the charts, chances are we may produce it at normal catalogue prices.