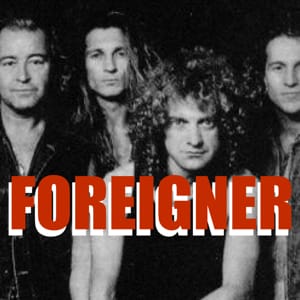 Formed in 1976 and fronted by Lou Gramm and Mick Jones, Foreigner have sold a staggering 37 million records. Their self titled debut album in 1976 sold over 4 million copies and included Hit Trax MIDI File hits "Feels Like the First Time" and "Cold as Ice". They followed up with "Hot Blooded", "Dirty White Boy" and "Urgent" until their mega successful 1981 release "4" included "Waiting for a Girl Like You" and "Juke Box Hero". In 1984, Foreigner released 'Agent Provocateur" and the smash world #1 "I Want to Know What Love Is". (© 2013 John Ialuna Biography author)

Is your favourite Foreigner MIDI Karaoke File or MP3 backing track missing? If you need a new backing track that’s unavailable at the current time, click in the Contact button at the top of the page and request the backing track. If the song is current and in the charts, chances are we may produce it at normal catalogue prices.