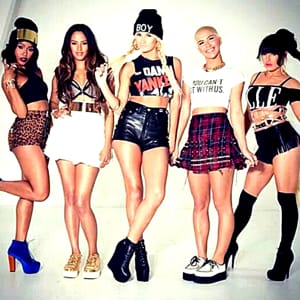 G.R.L. are a female vocal group formed by Robin Antin with members from the USA, Canada and the UK. G.R.L. was formed to replace the members of departed Pussycat Dolls and debuted doing commercials at the 2012 Super Bowl. In 2013, the band under their new name G.R.L released their debut single "Ugly Heart" which made the Top 10 in Australia, New Zealand and Ireland.

Is your favourite G.r.l. MIDI Karaoke File or MP3 backing track missing? If you need a new backing track that’s unavailable at the current time, click in the Contact button at the top of the page and request the backing track. If the song is current and in the charts, chances are we may produce it at normal catalogue prices.