In 1988, software makers Gerhard Lengeling and Chris Adam developed Creator Notator SL (Notator SL) on the ATARI ST computer. Notator SL used a series of parts called 'patterns' such as intro, verse, chorus etc, each with 16 MIDI channels or more using the optional MIDI expander. When patterns were complete, the music producer would link them in an 'Arrangement' and export as a Standard MIDI File.

Around 1993 a new company 'Emagic' was formed and a Windows version named 'Notator Logic' was developed and for the first time included audio recording. In truth, the first Windows versions were terrible! Early PC RAM and memory limitations contributed to crashing and loss of song data as lamenting producers wished they never sold their old ATARI's.

In 2002, Apple bought out Emagic and acquired Logic. In the same breath Apple announced it was discontinuing the Windows version making Logic exclusive to MAC. Despite rumblings among PC users this was seen as a good move which proved true. Apple put in a great deal of its resources to completely rebuild Logic from the ground up, a decision that resulted in Logic Pro X being the industry standard DAW and MIDI File creation platform.

In this basic tutorial, I will show you how to load, edit, quantize, humanize save and convert MIDI Files in Logic Pro X. This tutorial does not cover creating a MIDI File from new although you can use this information and apply to a new project.. This tutorial assumes the user is using a professional MIDI File which is correctly setup to 'load and play' in a General MIDI device.

Select All then deselect the drum track (MIDI channel 10). On the left channel strip, adjust the amount of transpose. When done, Select All' and Normalize (Ctrl+N) to lock in the changes.

Select the instrument, Press E to open the Event Editor. Change or add the Program Number to select a instrument. When done, Normalize (Ctrl+N) to lock in the changes

Quantized tracks (where note position is quantized to the beat) van sound mechanical. This is okay in dance music and EDM. Rock and acoustic songs can sound static when quantized. Fortunately, it's easy to transform the song data like a human would play it.

Set Velocity and Length windows to 'Thru'. Set 'Position' window to +- Random and set value to 0 0 0 4. Press 'Select Operate' to apply. The MIDI File will now have a more natural feel.. 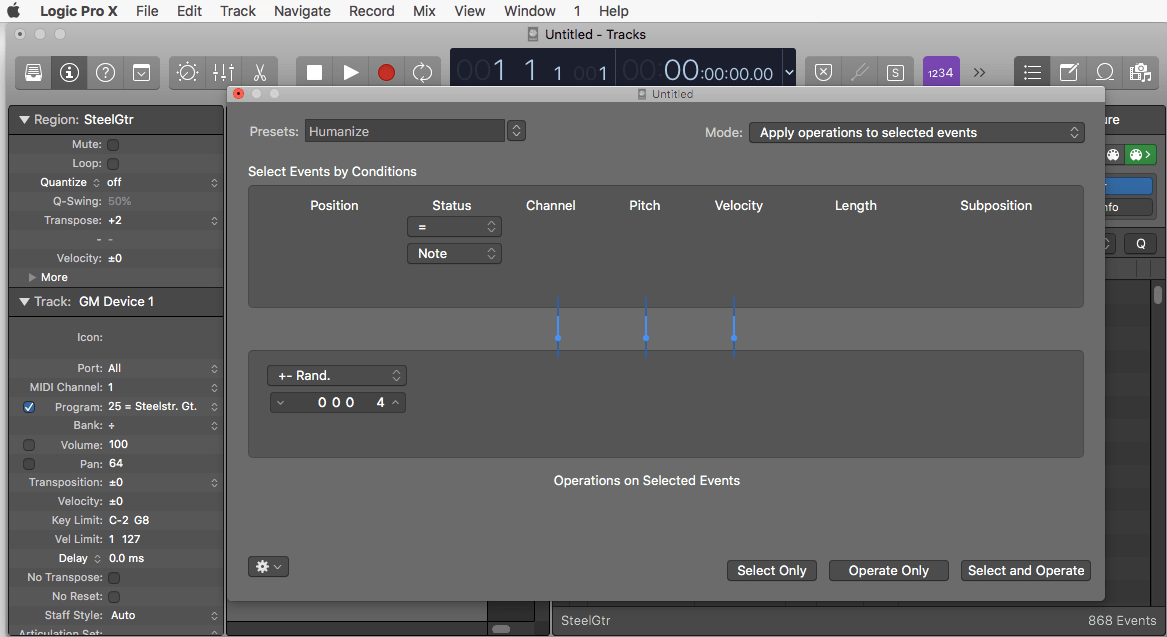 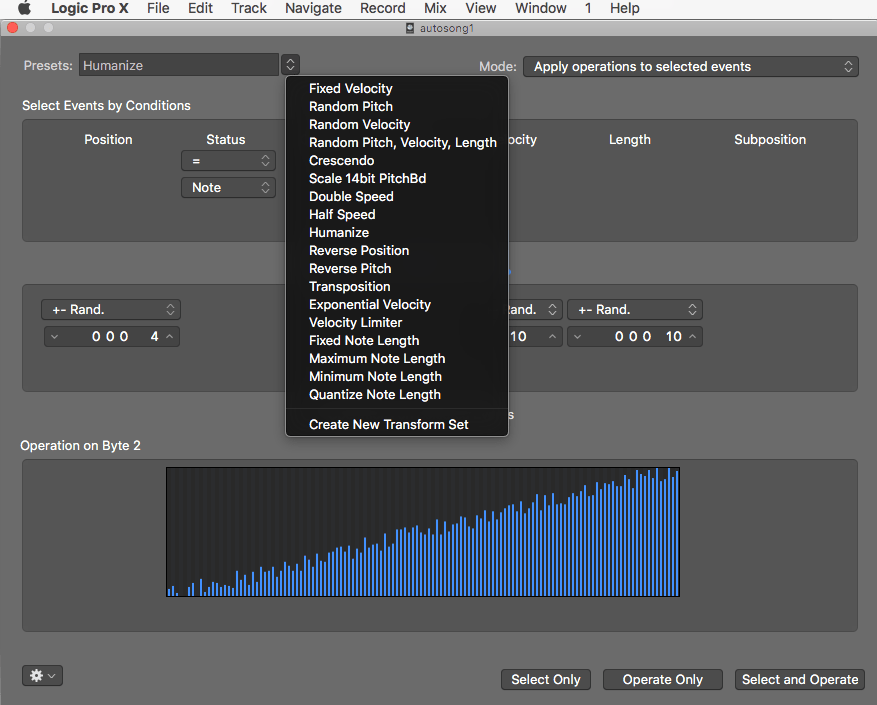 2: : Select All (COMMAND+A) then 'Export Selection s MIDI File. NOTE - this is a very important step. If you do not Select All, Logic will only export the highlighted section and ignore everything else. 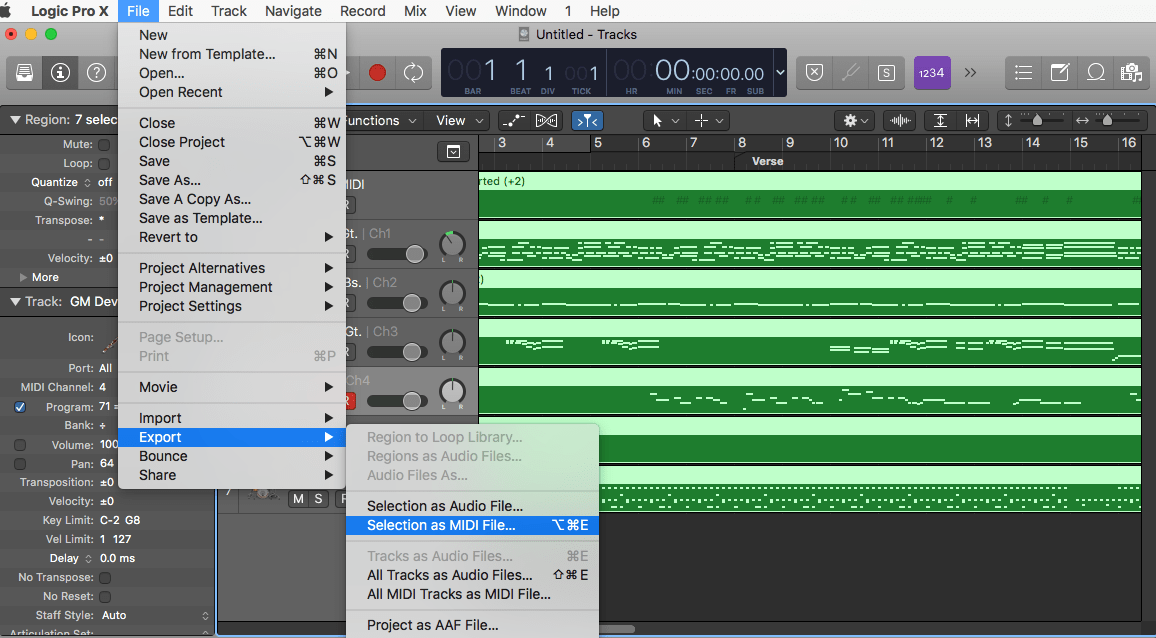 Convert MIDI File to WAV MP3 and other Audio Formats

Logic Pro can create a stereo WAV MP3 and AAC audio file from track data. If you are using Logic's EXS samples and audio tracks (non-MIDI), the process is simple. Select All then go File>Bounce>Project or Section. This opens the window below. Select the formats you require hen press OK. If saving MP3, use the settings as shown in the image below (except Start/End which depends on song length). If your song tracks are MIDI, there's a little more involved. Refer to the YouTube video's in Related Links. 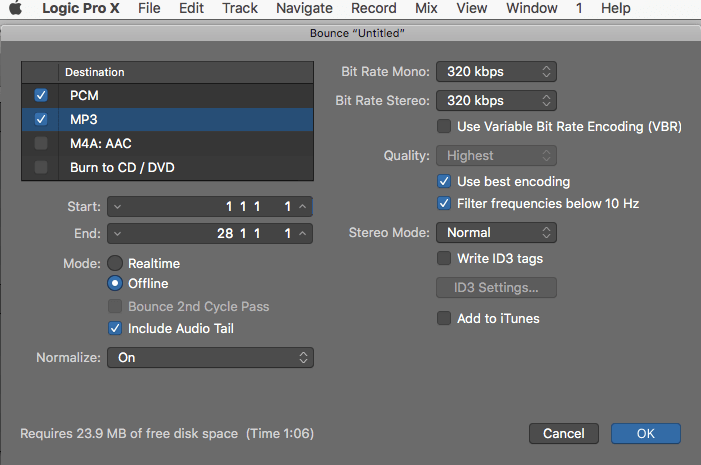