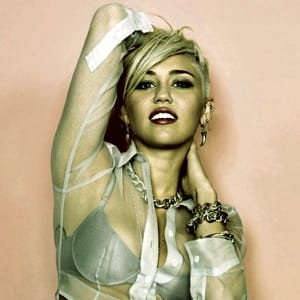 Miley Cyrus is American singer and actress and the daughter of American country artist Billy Cyrus. Born on November 23 1992, Cyrus began her career in minor TV show roles until she struck gold in 2006 with the Disney production "Hannah Montana". The show skyrocketed Cyrus into the stratosphere.

Her 2007 debut album sold 3 million in the US alone. Her follow-ups were equally successful. As an artist, Cyrus is maturing and in 2013, drasically altered her image following a controversial performance and duet with Robin Thicke at the 2013 MTV Video Music Awards. (Bio by John Ialuna 2013)

Is your favourite Miley Cyrus MIDI Karaoke File or MP3 backing track missing? If you need a new backing track that’s unavailable at the current time, click in the Contact button at the top of the page and request the backing track. If the song is current and in the charts, chances are we may produce it at normal catalogue prices.