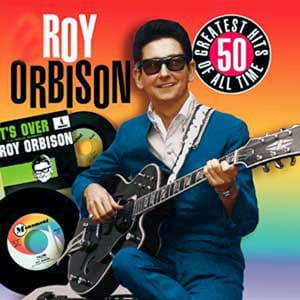 On inducting the Big-O into the rock’n’roll hall of fame, Bruce Springsteen remarked ‘we all want to sing like Roy Orbison, but everyone knows, nobody sings like Roy Orbison’. One of Sun Records original recording artists, Roy gained success with Monument records and had hits with ‘Only The Lonely’, ‘In Dreams’, Oh Pretty Woman’, ‘Crying’ and Leah. During the late 1980’s Orbison teamed up with George Harrison, Bob Dylan, Tom Petty and Jeff Lynne to form the sensational Traveling Wilburies. Orbison also had a smash comeback album and hit ‘You Got It’ which topped the charts shortly before his tragic death. (© 2013 John Ialuna Biography author for Hit Trax)

Is your favourite Roy Orbison MIDI Karaoke File or MP3 backing track missing? If you need a new backing track that’s unavailable at the current time, click in the Contact button at the top of the page and request the backing track. If the song is current and in the charts, chances are we may produce it at normal catalogue prices.