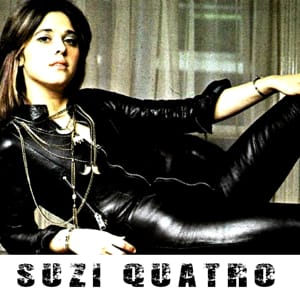 Born Susan Kay Quatro in 1953, Suzi Quatro is an American singer, songwriter and bass player. Based in the UK, Quatro was the first female bass player to become a major rock star. It was during the 1970's that Quatro, armed with songwriters Chinn & Chapman and producer Mickie Most that the powerhouse performer smashed the charts in the UK, Europe and Australia. Quatro has sold over 50 million albums and made her name as an actress with appearances in Happy Days, Minder and Absolutely Fabulous. During later years she continued her chart success with a string of ballads and duets (notably with Chris Norman from Smokie).

Is your favourite Suzi Quatro MIDI Karaoke File or MP3 backing track missing? If you need a new backing track that’s unavailable at the current time, click in the Contact button at the top of the page and request the backing track. If the song is current and in the charts, chances are we may produce it at normal catalogue prices.