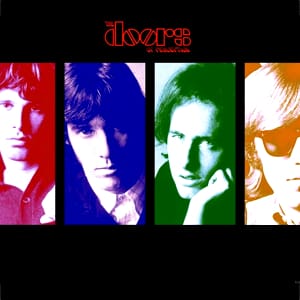 The Doors MIDI Files Backing Tracks - Formed in 1965 and featuring Jim Morrison, Robby Krieger, Ray Manzarek and John Densmore, The Doors were a provocative alternate rock band, one of the first in this era. Morrison loved to shock, and shock audiences he did, much to their delight and to the chargin of local law enforcers. It wasn't a Doors gig if the band wasn't evicted half way theough the show by heavy handed police. Those were the times. Primarily and album band, several singles made top of the charts, including: Riders on The Storm, Light My Fire, Hello I Love You, L.A. Woman and Roadhouse Blues. (© 2013 John Ialuna Biography author)

The Doors MIDI Files, MIDI Karaoke MP3 professional backing tracks and Lyrics produced by Hit Trax. Click on any title to view song details like tempo, key, BPM, length and a preview The Doors video. View and print The Doors song lyrics which include MIDI Instrument track listing (* where available) all from the song page.

Is your favourite The Doors MIDI Karaoke File or MP3 backing track missing? If you need a new backing track that’s unavailable at the current time, click in the Contact button at the top of the page and request the backing track. If the song is current and in the charts, chances are we may produce it at normal catalogue prices.