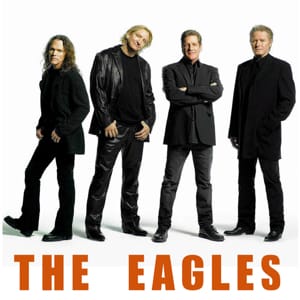 The Eagles are Glenn Frey, Don Henley, Joe Walsh and Timothy Schmidt. Former members include Bernie Leadon, Randy Meisner and Don Felder. Formed in California in 1971, The Eagles sold over 120 million albums.The epic 1977 ‘Hotel California’ still ranks as one of the most important albums in rock music history. The Eagles Greatest Hits Vol 1 is a perennial best selling album. (Bio by John Ialuna for Hit Trax)

The Eagles MIDI Files, MIDI Karaoke MP3 professional backing tracks and Lyrics produced by Hit Trax. Click on any title to view song details like tempo, key, BPM, length and a preview The Eagles video. View and print The Eagles song lyrics which include MIDI Instrument track listing (* where available) all from the song page.

Is your favourite The Eagles MIDI Karaoke File or MP3 backing track missing? If you need a new backing track that’s unavailable at the current time, click in the Contact button at the top of the page and request the backing track. If the song is current and in the charts, chances are we may produce it at normal catalogue prices.