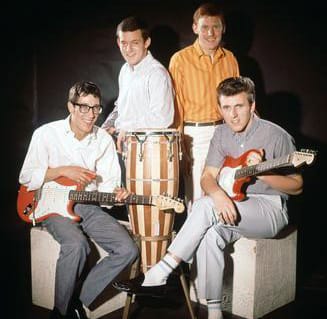 The Shadows were an English guitar instrumental band of the 1950's to 2000's. The Shadows were a band in their own right and also Cliff Richard's backing band (Cliff Richard & The Shadows). All up, they amassed 69 hit singles, 35 with Cliff. The Shadows main lineup were Hank Marvin, Bruce Welch and Brian Bennett. The band included various members throughout their time but none more important than "The Strangers" guitarist John Farrar. The Shadows featured the twangy Fender Stratocaster sound of legendary guitarist Hank Marvin. (© 2013 John Ialuna Biography author)

Is your favourite The Shadows Feat. Hank Marvin MIDI Karaoke File or MP3 backing track missing? If you need a new backing track that’s unavailable at the current time, click in the Contact button at the top of the page and request the backing track. If the song is current and in the charts, chances are we may produce it at normal catalogue prices.