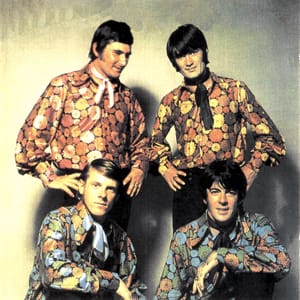 The Shadows were a band formed in Melbourne Australia in 1961. The original Strangers line-up were Peter Robinson (bass), Garth'Thompson (drums), Laurie Arthur (lead guitar) & Fred Weiland (rhythm guitar). In 1964, John Farrar joined and the band backed and recorded with many popular Australian artists and were the resident band on TV shows "Sunnyside Up" and "The Go Show". Their reputation as having the most professional 'live sound' in Australia and charted with some intelligent pop songs including "Melanie Makes Me Smile", "Happy Without You". All 'The Shadows' MIDI Files and Backing Tracks are AMCOS Licensed and royalty paid. (© 2017 John Ialuna for Hit Trax)

The Strangers MIDI Files, MIDI Karaoke MP3 professional backing tracks and Lyrics produced by Hit Trax. Click on any title to view song details like tempo, key, BPM, length and a preview The Strangers video. View and print The Strangers song lyrics which include MIDI Instrument track listing (* where available) all from the song page.

Is your favourite The Strangers MIDI Karaoke File or MP3 backing track missing? If you need a new backing track that’s unavailable at the current time, click in the Contact button at the top of the page and request the backing track. If the song is current and in the charts, chances are we may produce it at normal catalogue prices.