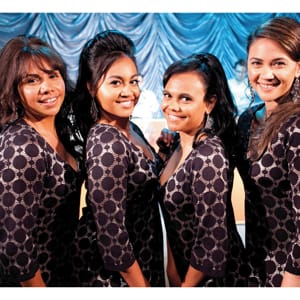 Jessica Mauboy And The Sapphires MIDI Files Backing Tracks - "The Sapphires" is a movie based on four young Aboriginal women - Gail, Julie, Cynthia, and Kay, who form an all girl band. The girls gained the attention of talent scout Dave Lovelace, who transformed them into the soul-singing girl group The Sapphires. The movie was the highest-earning Australian film on its opening weekend, screening in 275 cimemas and grossing $2,320,000 in just 2 days. (© 2013 John Ialuna Biography author)

Is your favourite Jessica Mauboy And The Sapphires MIDI Karaoke File or MP3 backing track missing? If you need a new backing track that’s unavailable at the current time, click in the Contact button at the top of the page and request the backing track. If the song is current and in the charts, chances are we may produce it at normal catalogue prices.