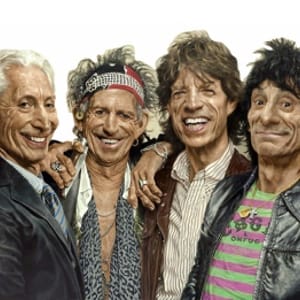 The Rolling Stones - The worlds greatest Rock’n’Roll Band recorded and toured for 6 massive decades. Fronted by Mick Jagger and Keith Richards, the ‘Stones’ carried their career with minimal lineup changes and a touring resume’ that most bands only dream about. Guitarist and legend Keith Richards is often dubbed ‘the man that death forgot’. The band was formed in London in 1962 by Brian Jones and Ian Stewart. (© 2016 John Ialuna Biography author for Hit Trax)

The Rolling Stones MIDI Files, MIDI Karaoke MP3 professional backing tracks and Lyrics produced by Hit Trax. Click on any title to view song details like tempo, key, BPM, length and a preview The Rolling Stones video. View and print The Rolling Stones song lyrics which include MIDI Instrument track listing (* where available) all from the song page.

Is your favourite The Rolling Stones MIDI Karaoke File or MP3 backing track missing? If you need a new backing track that’s unavailable at the current time, click in the Contact button at the top of the page and request the backing track. If the song is current and in the charts, chances are we may produce it at normal catalogue prices.