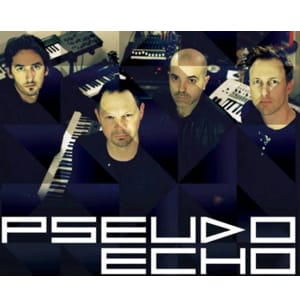 Pseudo Echo were formed in the early 1980's by Brian Canham in the 'New Wave' pop era. The band was hugely popular nationwide and scored hits with "Listening", "A Beat for You", "Don't Go", "Love an Adventure", "Living in a Dream" and their cover of Lipps Inc "Funkytown", which made #1 on the charts. Pseudo Echo took 80's new wave fashion and hairstyles to a new level in a perfect fit for the outrages 80's.

Is your favourite Pseudo Echo MIDI Karaoke File or MP3 backing track missing? If you need a new backing track that’s unavailable at the current time, click in the Contact button at the top of the page and request the backing track. If the song is current and in the charts, chances are we may produce it at normal catalogue prices.