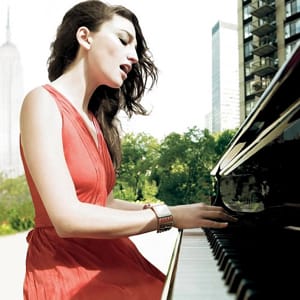 Sara Bareilles is an American singer, songwriter and pianist. Bareilles became known through her 2007 #1 hit, Love Song. Nominated for 3 Grammy awards and selling over a million albums (US), Bareilles began her career performing in Los Angeles bars and clubs, building her audience and scoring support gigs to Aqualung and Mika among other artists. In 2007, iTunes released her single "Love Song" as the weeks free single. The gesture rocketed Bareilles debut album Little Voice shot to #1 on the iTunes album downloads. © 2013 John Ialuna Biography author)

Is your favourite Sara Bareilles MIDI Karaoke File or MP3 backing track missing? If you need a new backing track that’s unavailable at the current time, click in the Contact button at the top of the page and request the backing track. If the song is current and in the charts, chances are we may produce it at normal catalogue prices.