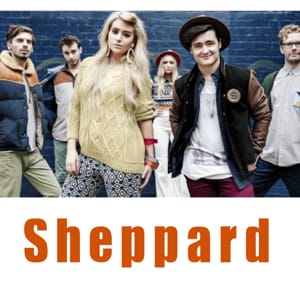 Sheppard are an Indie band from Brisbane, Australia. Sheppard formed in 2009 by brother and sister Amy and George Sheppard and eventually grew to their current 6 piece line up. Their second single "Geronimo" hit the top of the Australian charts and had the distinction of replacing Pharrell Williams mega hit "Happy" from the National #1 position.

Is your favourite Sheppard MIDI Karaoke File or MP3 backing track missing? If you need a new backing track that’s unavailable at the current time, click in the Contact button at the top of the page and request the backing track. If the song is current and in the charts, chances are we may produce it at normal catalogue prices.