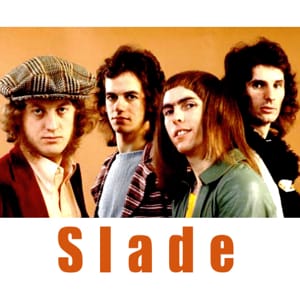 British glam rock band "Slade" are acknowledged as the most successful UK band of the 1970's. Slade were Noddy Holder, Dave Hill (Guitars), Jim Lea (Bass) and drummer Don Powell. The band had 3 of their singles land at #1 and sold over 6.5 million singles, all written by Holder and Lea. The band were popular in the UK and Australia but somehow failed to ignite in the USA. Slade's contemporaries included David Bowie, Roxy Music, Suzi Quatro, Mud, Smokie and Gary Glitter.

Is your favourite Slade MIDI Karaoke File or MP3 backing track missing? If you need a new backing track that’s unavailable at the current time, click in the Contact button at the top of the page and request the backing track. If the song is current and in the charts, chances are we may produce it at normal catalogue prices.