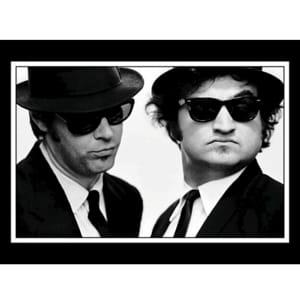 The Blues Brothers began in 1978 on the popular comedy series, Saturday Night Live. The movie, The Blues Brothers was written by Dan Aykroyd and John Landis, who also directed the epic. The story was based around 2 misfit orphans bought up on soul music (by Cab Calloway) who must redeem themselves and save a local orphanage from closure. (© 2013 John Ialuna Biography author)

The Blues Brothers MIDI Files, MIDI Karaoke MP3 professional backing tracks and Lyrics produced by Hit Trax. Click on any title to view song details like tempo, key, BPM, length and a preview The Blues Brothers video. View and print The Blues Brothers song lyrics which include MIDI Instrument track listing (* where available) all from the song page.

Is your favourite The Blues Brothers MIDI Karaoke File or MP3 backing track missing? If you need a new backing track that’s unavailable at the current time, click in the Contact button at the top of the page and request the backing track. If the song is current and in the charts, chances are we may produce it at normal catalogue prices.