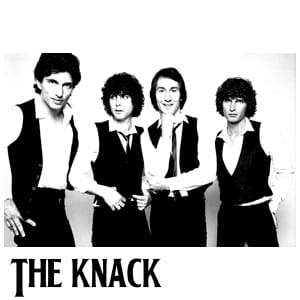 The Knack were an American New Wave band during the 1970's and 1980's Their breakthrough hit "My Sharona" from their debut album "Get The Knack" smashed sales around the world. The song is now a certfied 'classic rock' hit.

The album was recorded live (in the studio) with the band and producer capturing an amazing sound that bands to this day try to emulate on a studio recording. The album held number #1 spot on the Billboard Hot 100 chart for 5 consecutive weeks. (Bio by John Ialuna 2013)

The Knack MIDI Files, MIDI Karaoke MP3 professional backing tracks and Lyrics produced by Hit Trax. Click on any title to view song details like tempo, key, BPM, length and a preview The Knack video. View and print The Knack song lyrics which include MIDI Instrument track listing (* where available) all from the song page.

Is your favourite The Knack MIDI Karaoke File or MP3 backing track missing? If you need a new backing track that’s unavailable at the current time, click in the Contact button at the top of the page and request the backing track. If the song is current and in the charts, chances are we may produce it at normal catalogue prices.