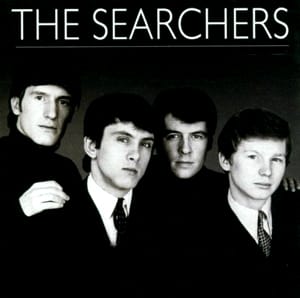 The Searchers are an English 'Mersyside" beat band that formed in the early 1960's. Their first hit in 1961 was a cover of the Drifters hit, "Sweets for my Sweets". They followed up with successful covers of "Needles and Pins" and "When You Walk In The Room" (both Jackie Deshannon songs), "Don't Throw Your Love Away" and "Love Potion No. 9". Guitarist Tont Hatch wrote their only "original" hit - Sugar and Spice under the pseudonym Fred Nightingale which was a UK #2 chart topper in 1962.

The Searchers MIDI Files, MIDI Karaoke MP3 professional backing tracks and Lyrics produced by Hit Trax. Click on any title to view song details like tempo, key, BPM, length and a preview The Searchers video. View and print The Searchers song lyrics which include MIDI Instrument track listing (* where available) all from the song page.

Is your favourite The Searchers MIDI Karaoke File or MP3 backing track missing? If you need a new backing track that’s unavailable at the current time, click in the Contact button at the top of the page and request the backing track. If the song is current and in the charts, chances are we may produce it at normal catalogue prices.